A Garden Blooms to Honor a Career 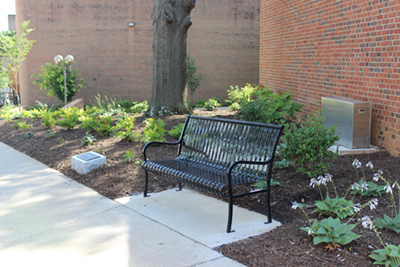 A view of the Bob Mashburn Garden.

The Bob Mashburn Garden blooms beside a walkway between the Clarence Brown Theatre and the Carousel Theatre. It bridges the distance between the two playhouses where Professor Robert “Bob” Mashburn (’57) worked for more than 30 years bringing performances to the stage. Mashburn’s wife Ginna envisioned the shade garden of coneflowers, hostas, and bee balm.

“Bob often mentioned leaving money in his will to beautify the space so, I decided to do it now so he could enjoy it,” said Ginna. “My mission is to honor Bob’s profession and the history of UT theatre.”

Ginna and Bob Mashburn, along with Bob’s daughter Missy Parker, take a seat on the new bench installed in the garden.

The dedication ceremony coincided with Mashburn’s 86th birthday celebration. Mashburn’s daughter Melissa Parker (’82, ’85) and grandson Sam Parker (’18), attended the dedication and agreed that it was a great way to celebrate.

“Daddy was very emotional and totally surprised by this tribute,” Parker said.

Mashburn’s career at UT included designing the set for Look Homeward Angel, the first production in the Clarence Brown Theatre. He went on to direct dozens of plays, teach voice and diction, and act on stage and for the small screen, appearing in WBIR’s Heartland Series. 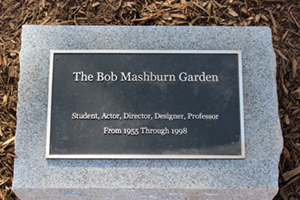 A plaque recognizes Bob Mashburn’s impact on the UT Department of Theatre.

“Dr. Bob deserves every flower that blooms in his garden,” said Tom Cervone (‘93, ’10), managing director of the Clarence Brown Theatre/UT Theatres. “I had the good fortune to have him as a mentor, a director, a fellow-actor, a colleague, and, coolest of all, a dear friend.”

The garden’s Lenten roses are descended from plants cultivated by Paul Soper, a legendary UT theatre professor. Soper shared the Lenten roses with Bob and Ginna Mashburn, and, at Ginna’s suggestion, staff from the UT Facilities Services transplanted some from their yard to campus.

“This is a popular path for theatre goers and students,” said Bethany Morris (’08, ’11), project manager and landscape architect for UT Facilities Services. “We knew that a garden here would complement the new Carousel Theatre when it is built and are delighted that Mrs. Mashburn’s gift gave us the opportunity to make this a unique space for campus.”