As a college and institution of higher learning, it is our mission to promote intellectual inquiry and effective civic engagement within the context of respect for diversity. Our ability to educate is one tool for making change in the world. We can demand change in our community, but first, we have to educate our community on why that change is necessary.

In July, we launched College Conversations: Allyship & Antiracism, a bi-weekly series featuring faculty members in the College of Arts and Sciences whose research focuses on identifying racism, how to become an effective antiracist, and other topics related to allyship and antiracism.

Tyler Wall, an assistant professor of sociology, kicked off the series with a timely topic – “Police Power, Racial Terror, and the Violence of Reform.” Ongoing protests against racist police violence amid the global pandemic this summer lead to important debates about the role and function of police in our society. Wall, who writes on the political and cultural economies of racialized state violence and security politics, placed police power within a wider context of historical cycles of violence and reform and the current legitimacy crisis of US policing. He examined how police power is inseparable from the structures that govern and reproduce racial capitalist society. 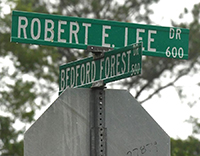 Next, Derek Alderman, professor of geography, and his colleague Gregg Suzanne Ferguson, presented “Embattled Names, Racialized Memories, and Wounded Places,” to help contextualize the calls from activists and communities to remove the names of racist historical figures from the names of streets, parks, schools, university campus buildings, and other spaces. Alderman discussed the power of commemorative place names and the complex role they play in the memory-work of antiracism and the politics of planning more socially just landscapes. Ferguson described her own efforts to rename a Stonewall Jackson Middle School and the results of her dissertation, which documented the harmful, wounding effects of white supremacist and Confederate names on students and teachers of color. 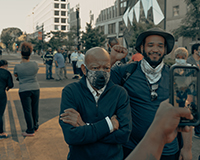 Following the death of Congressman John Lewis, Shayla Nunnally, professor of political science and director of the Africana Studies Program, presented “The Life and Legacy of John Lewis.” Getting into “good trouble,” as Lewis called it, manifested into peaceful, civil disobedience to protest the inequality of Jim Crow laws in the American South. Using his legacy as a backdrop, Nunnally related and discussed contemporary forms of activism to the current struggle for democratic inclusion on behalf of Black Americans and others.

Deadric Williams, an assistant professor of sociology whose research focuses on two general themes of racism and families and stress, couples’ relationships, and health, presented “Race, Family Structure, and Poverty: Towards a racial stratification approach.” Williams discussed how family structure remains a dominant explanation for understanding racial inequality and poverty and presented racial stratification as an alternative perspective to emphasize the social construction of race and how race contributes to the unequal distribution of resources. He concluded that these mechanisms not only reinforce the racial order but also maintain the disproportionate amount of Black and Hispanic families in poverty.

Continuing on the theme of protests, Kirsten Gonzalez and Patrick Grzanka, faculty in the Department of Psychology, discussed their work on white racial emotions and allyship in “From White Tears to Social Transformation: Antiracism beyond guilt.” The protests of 2020 brought several issues to the forefront of the national conversation on race, including emotions of white antiracism. Gonzalez and Grzanka argued these emotions could be particularly contentious concepts in racial justice movements as white people’s feelings may advance or undermine efforts to dismantle white supremacy. Rather than center white people’s feelings and subjectivities, they suggested that white guilt and associated forms of affect have both limits and possibilities for promoting social transformation.

Michael Olson, a professor of psychology, clarified and situated the concept of implicit bias within a dual-process social cognitive framework in “Why, When, and How Implicit Bias Matters.” He discussed how it forms and changes, affects perceptions, judgments, and behavior, including intentional acts of discrimination, and how its impacts can be mitigated in interpersonal and organizational contexts.

Nora Berenstain, an associate professor of philosophy, discussed how science has colluded with white supremacy and colonialism to produce evidenced-based justifications for racial oppression in “Scientific Racism: Historical roots and contemporary manifestations.” Berenstain addressed her discipline’s role in the production of theories that justify and maintain social and political structures of colonial white supremacy. She introduced the framework of active ignorance as a way to understand the strategies that scientists and philosophers use to sow confusion around the fraught relationship between science and race.

Shortly before the election, Political Science Professors Christopher Ojeda and Richard Pacelle presented “To Vote or Not to Vote? That is the Question.” They discussed how voting became a central political issue in the 2020 election and how each political party accused each other of compromising the integrity of elections by trying to manipulate the voting process. Their ultimate takeaway? Why people should vote in the 2020 election.

To celebrate the start of Native American Heritage Month in November, Lisa King presented “Doing Work to be Good Relatives: A conversation about antiracism and Indigenous decolonialism.” King, an associate professor of English, brought together the concepts of antiracist work and decolonial work to show how the two can be complementary, but how we need them both to deal with the ideological and cultural frames we live in, as well as the histories we inherit.

Jessi Grieser, a sociolinguist in the Department of English who specializes in discourse analysis, geosemiotics, and sociophonetics, wrapped up our fall speaker series with “Linguistic Diversity in the Classroom.” She explored the workings of standard language ideology and the principle of linguistic subordination and explained how we can move away from “correct English” in our assessment strategies and toward inclusive strategies that respect language variation.

Hundreds of UT faculty, staff, and students, as well as members of the East Tennessee community, joined us via Zoom for the series, asked great questions, and engaged in a productive dialogue about allyship and antiracism. Recordings of the presentations are available on the College Conversations website.

This semester, we challenged each other to think about deeply engrained biases we carry. We learned about structural racism from each other and worked together to promote and advocate for antiracist policies. Being antiracist is a conscious decision to make consistent, equitable choices every day. Each of us have the ability for ongoing self-awareness and self-reflection as we educate, learn, live, and work together in our UT community and beyond.