Although he was interested in astrophysics at a young age, Andrew Steiner was never a big telescope person. Growing up, he preferred books by science giants, such as Carl Sagan, and loved math. He gravitated towards theoretical astrophysics during college and now works on the cutting edge of answering fundamental questions about the universe. 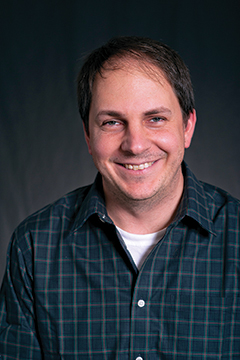 “Neutron stars have the potential to teach us more about where we came from and answer the fundamental questions about how our universe works,” says Steiner, assistant professor of physics. “In the field of nuclear physics, one of the big questions is what is the nature of dense matter. Neutron stars are the only place to answer that question.”

In August 2017, scientists at the Laser Interferometer Gravitational Wave Observatory (LIGO) in both Livingston, Louisiana, and Hanford, Washington, detected gravitational waves from a merger of two neutron stars. Gravitational waves, first predicted by Albert Einstein in 1916, are essentially ripples in the fabric of space and time caused when an object with mass moves. They are extremely weak, and it was not until 2016 that researchers successfully detected the first direct evidence of gravitational waves from a collision of two black holes. The 2017 detection was the first from merging neutron stars.

“The detection of gravitational waves by LIGO is a significant accomplishment and an important step for our community because they provide a new window into neutron stars and our universe,” Steiner says.

Since detecting gravitational waves is still new, it is important for physicists to have an approximate idea of what they are looking for in the data before they look for it. That is where Steiner and his research team come in.

“It’s important for the physicists at LIGO to have a good educated guess of what kinds of signals they are likely to see,” Steiner says. “Part of what we do is try to make that educated guess. We are pushing forward to find out what are the limits on realistic signals in terms of this parameter called tidal deformability.”

A critical parameter to understanding why some neutron stars are better at generating gravitational waves than others can be called squishiness, which is a measure of the response to tidal forces and very similar to how the Earth responds to the tidal force from the moon. Using neutron star models, Steiner and his research team estimate neutron star masses and radii.

“Neutron stars provide a window for us to test our knowledge and gain a better understanding of the properties of nuclear matter, which will also help boost generations of endeavors from both nuclear theorists and experimentalists,” says Xingfu Du, a third-year graduate research assistant in Steiner’s group.

As Steiner and his research team continue to push the frontier in neutron star data analysis, humanity’s long-lasting quest to understanding the universe and our relationship to it comes more into focus.

“In everyday life, ingredients of science and technology are permeated in education, political geography, military, space science, entertainment, literature, and history,” says Sophia Han, postdoctoral research associate in Steiner’s group. “Satisfying society’s scientific interests and curiosity is a vital part of the role of scientific research. The fact that elements as building blocks of life on earth are dated back to endpoints of stellar evolution far, far away in space time still strikes me. I believe this is a breathtaking era to extend the frontier of our knowledge and tackle complex problems in science for the common good.”

A computer simulation shows the collision of two black holes, which created gravitational waves – ripples in space and time – detected by LIGO.