We hosted our annual College of Arts and Sciences Alumni and Philanthropy Awards celebration Friday, September 21, 2018, and honored several alumni for their professional achievements and philanthropic endeavors.

Peter Knappett earned a PhD in geology in 2010. After graduating, he received a prestigious Marie Curie Postdoctoral Research Fellowship at the Hemholtz Center for Environmental Health from 2010-11 in Munich, Germany, and from 2012-13, took another postdoctoral position at the Columbia University Lamont-Doherty Earth Observatory. He is an assistant professor at Texas A&M University with plans to submit his tenure dossier this fall. Knappett’s research focuses on microbial contaminants and arsenic in alluvial aquifers in Bangladesh, Mexico, and the Southeastern United States. His accomplishments include 31 peer-reviewed journal articles, $430,000 in research grants, and advisor to a dozen graduate students. He also received the 2014 Kohut Early Career Award from the Hydrogeology Division of the Geological Society of America. Knappett collaborates with faculty in the UT Department of Earth and Planetary Sciences, hosts speakers, and supports EPS with regular monetary contributions. 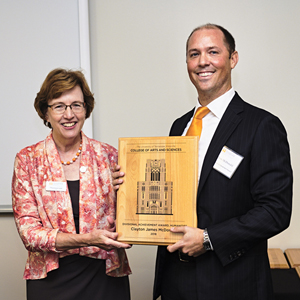 In 2000, Clayton McDonald graduated from the Language and World Business Program with a concentration in Spanish. Today, he is the head of global Sales for INTL FCStone, Inc., a publicly held financial services firm specializing in international currency trading in the developing world. He is one of the most active LWB alumni who returns to campus each year to guest lecture and attend poster presentations. His interactions with our students help them envision a career with a degree in Spanish. One student commented, “I had always viewed as being paid to travel as an aspiration I could only dream of, but after hearing from Mr. McDonald, it is now a goal that is more in reach.” In 2015, he established the Clayton McDonald Undergraduate Travel Abroad Scholarship for LWB students. McDonald began his career as a trader at INTL FCStone and worked his way up to his current position. His success reflects the message we try to get across about a degree in the humanities – it can lead to a successful and productive career anywhere in the world because the ability to communication in any language will always be a significant key to success.

The Scholarly and Creative Achievement Award recognizes alumni who have achieved a high degree of success in their chosen field in either a scholarly or creative endeavor. The trademark of this recipient is a record of notable accomplishments and a history of outstanding contributions to their discipline and/or creative pursuits. This year, we recognize Wanda Rushing with the Scholarly Achievement award and Alan Gratz with the Creative Achievement award. 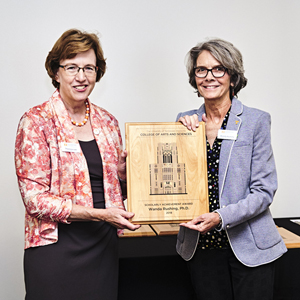 Wanda Rushing earned her PhD in sociology in 1998. She is Professor Emerita of Sociology at the University of Memphis and the author of Memphis and the Paradox of Space: Globalization in the American South. Rushing’s scholarship focuses on the political economy of development, racial and social inequality, education and economic development in the South, and urban change. Her work continues to question popular assumptions about the South. In recent research on feminism and intersectionality, Rushing encourages scholars and activists to broaden their concept of intersectionality to include place, region, and locale as well as gender, race, and sexuality in an effort to explain the existence and persistence of social inequality better. She is the former president of Sociologists for Women Society and continues to publish her work in prestigious venues, presents at academic conferences, and remains a force in the discipline despite her recent retirement. In 2014, Rushing established the Dr. Wanda Rushing Sociological Research Excellence Endowment in Sociology to recognize outstanding faculty and graduate students for research efforts.

Alan Gratz is a 1993 graduate of the College Scholars Program with an emphasis in creative writing and a highly successful full-time writer of young adult fiction. Since 2006, he has published 14 novels, short stories, plays, and television scripts. Gratz has created a body of work that inspires young people to read. Some of his books, such as Samurai Shortstop, are just fun and will lure the sports crazy boy to put down his glove and pick up a book. Others, such as Something Rotten, are a path into great literature, in this case Shakespeare. Recent books, Refugee and Ban This Book introduce important social issues. Gratz has received several prestigious awards for his work. His more recent novel, Refugee, was on the New York Times Bestseller list for more than three months and won numerous awards, including the Sidney Taylor Book Award for Older Readers and the NCTE Charlotte Huck Award for Outstanding Fiction for Children.

The Professional Achievement Award recognizes alumni who have achieved a high degree of success in their chosen field, notable career accomplishments, and a history of outstanding contributions to their profession. This year, we recognized Ganapathy Shanmugam with this award. 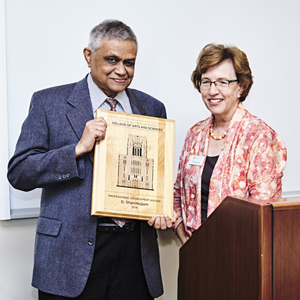 Ganapathy Shanmugam earned his PhD in geology in 1978. He has had a remarkable career, which included 22 years as a petroleum research geologist with Mobil Oil, followed by independent consulting and research and teaching at the University of Texas, Arlington. He helped redefine the understanding of deep-water sedimentary deposits and their role as oil reservoirs in the industry, a subject he has published extensively on throughout his career. Of the more than 130 peer-reviewed research articles, one of his papers (Shanmugam, 1996, J. Sed. Research) was the most highly cited paper in three journals in his field for a seven-year period and another paper (Shanmugam et al., 2009, J. Sed. Research) was listed by Web of Science as one of the most cited papers in this field over a five-year period after publication. In 2018, Shan received the Tamil American Pioneer Award of extraordinary professional achievements in academia from the Federation of Tamil Sangams of North America. 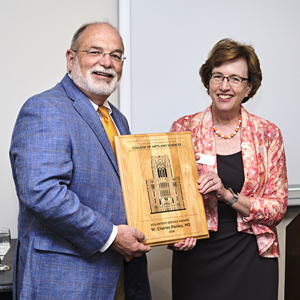 Charlie Penley graduated from UT with a degree in microbiology in 1978. He received his medical degree from Wake Forest and achieved a high level of professional success through his career as an oncologist. He served his profession by volunteering for American Society of Clinical Oncology including, the chair of the Clinical Practice committee, Government Relations committee, and Conquer Cancer Foundation. He also serves on the Board of Trustees of the Association of Community Cancer Centers. Penley’s contributions to the College of Arts and Sciences include being a member of the Dean’s Advisory Board since 2007, chair from 2014-16, and serving on the search committee for the executive director of development in 2015. His nonprofit experience helped guide the advisory board’s response to issues facing the university, such as legislative advocacy and achieving Top 25 benchmarks. Finally, He and his wife Connally established the Penley Fund for Graduate Studies in Arts and Sciences in 2008, which provides graduate student awards in any discipline within the college in order to attract top quality graduate students to our programs. 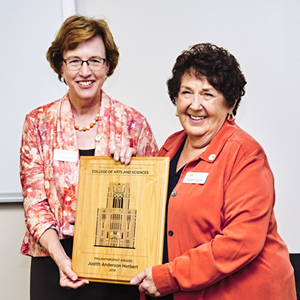 Judi Herbert graduated from UT in 1963 with a degree in English. She has been an advocate ever since. As a member of the Dean’s Advisory Board, she is helping UT take transformational strides towards creating a comprehensive Writing Center that offers an extensive array of writing support to students and faculty. Herbert and her husband Jim played a major role in the 2017 Big Orange Give campaign, successfully challenging the UT community to raise more than $1.5 million by offering a challenge gift for the Writing Center. Her gift was key to establishing a new undergraduate peer-tutoring program, providing more one-to-one tutoring help for students writing in upper-division courses, and to launching a new Writing Center service – help for students preparing application materials, such as cover letters for jobs, resumes, and personal statements. The gift also helps provide more support for faculty teaching courses with writing across disciplines by establishing a new summer workshop. With her help, we are enhancing our ability to ensure all students graduate the University of Tennessee, Knoxville with excellent writing skills.

The final award during the ceremony is the Dean’s Distinguished Alumnus/Alumna Award, which recognizes an outstanding alumnus/alumna of the college who has attained extraordinary distinction through a lifetime record of achievement and service. This year, we recognized Don Denbo. 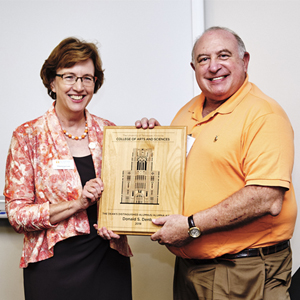 Don Denbo graduated with a degree in psychology and a minor in history from UT in 1971 and went on to earn his PhD in economics from the London School of Economics. Denbo served as the founder and principal of Commercial Insurance Associates, LLC. He is highly regarded among his peers in the commercial insurance industry with 40 years of business experience and more than 30 years of success specifically in the insurance field. His leadership extends from the insurance field into several other areas, including the owner of Denbo Metal Recovery and director of Tennessee Valley Recycling, LLC, Bancroft Technology Group, Jet Plex Associates, Shadowbluff Development, Reid Hill, and Greymont Kennels, LLC. Denbo is an athlete and an academic. For three years, he started as right guard for the UT Volunteers under Coach Doug Dickey. He also excelled academically as a Phi Beta Kappa, a finalist for the Rhode Scholarship, on the SEC Academic Honor Roll, and selected as a National Football Foundation Scholar Athlete. Denbo received the Potter Medical Scholarship to attend Vanderbilt University Medical School. He has served on the Dean’s Advisory Board and, along with his wife Jacque, made a leadership gift to the UT Humanities Center.