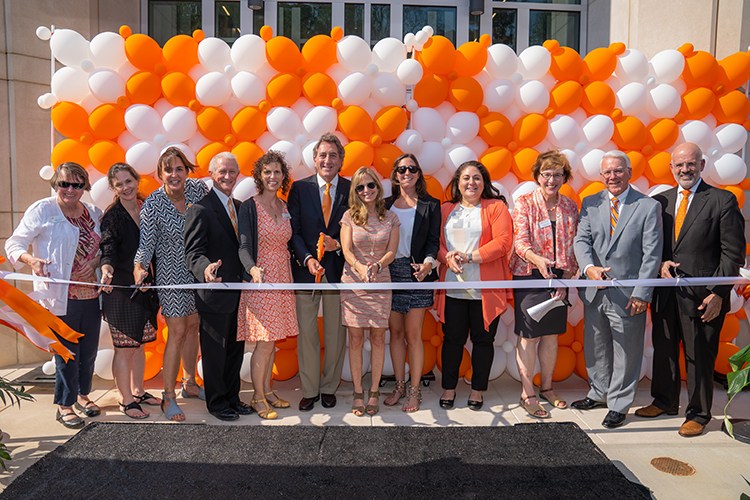 “The Mossmans are like fairy godparents to this place,” UT System President Joe DiPietro said during the building’s ribbon-cutting ceremony.

Ken and Blaire Mossman met in Knoxville in 1968 while pursuing their degrees at UT. Ken Mossman earned his master’s and doctoral degrees in health physics and radiation biology through the Institute of Radiation Biology, a joint program of UT and Oak Ridge National Laboratory, in 1970 and 1973, respectively. He went on to teach at the university level for 40 years. In 2013, President Barack Obama appointed him to serve on the US Defense Nuclear Facilities Safety Board.

Blaire Mossman earned a bachelor’s degree in French from UT in 1971. She spent 30 years as a science and technology publications editor and worked for the National Biomedical Research Foundation.

“The Mossmans wished to highlight the wonder and discovery of science and share it with our campus and surrounding community, so when it came time to name the building, we thought it would only be fitting to honor the legacy of Ken and Blaire Mossman to thank them for their endless generosity,” Interim Chancellor Wayne T. Davis said during the ceremony. “One highlight of the building for me is the student gathering space on various floors. If Ken and Blaire had not met in a student gathering space on campus all those years ago, we would not be sitting here today celebrating their legacy.”

The gathering spaces in the building will allow students, faculty, and staff to come together to collaborate and innovate. The classrooms and laboratories will give students hands-on experience to prepare them for future careers in their chosen fields.

“The cafe will provide the much-needed caffeine to get them through finals,” Davis added. “Whether it’s the people or the facilities, this campus changes lives in so many ways. The feeling you get when you walk on this campus is like none other. Ken and Blaire never forgot that feeling. It is only fitting that we honor their memory today.”

Blaire Mossman died of brain cancer in 2011 at age 60; Ken Mossman died suddenly in 2014 at age 67. Their contributions to the university, which included an estate gift, fund the Kenneth and Blaire Mossman Professorship in the College of Arts and Sciences and study abroad scholarships for undergraduate students in the Romance languages. Their gift also funds the annual Mossman Lecture, which brings nationally recognized speakers to campus to promote interest in science among youth.

Jay Whelan, head of the Department of Nutrition, said during his ribbon-cutting remarks that the state-of-the art facilities will help recruit and retain world-class students and faculty and propel research activities, all of which will help attract important funding for continued work.

“The Ken and Blaire Mossman Building is an amazing state-of-the-art structure that communicates to visitors, whether they are faculty or undergraduate students, that UT conducts cutting-edge research and that those lucky enough to be in this building are part of this endeavor,” Gladys Alexandre, head of the Department of Biochemistry and Cellular and Molecular Biology, said during the ceremony.

Michael Mossman, brother of Ken Mossman, said his brother and sister-in-law loved UT and would have reveled in what their donations have done to enhance the campus.

“Ken was an educator at heart,” he said. “My brother believed teachers don’t just teach, they create the environment where students learn. He would be so very, very proud of this building.”

A commitment to higher education and biomedical research drove their philanthropic endeavors at UT. The Mossmans were also strong believers in the value of a liberal arts education and served as members of the College of Arts and Sciences Dean’s Advisory Board.

“The gifts from Ken and Blaire are making a transformative impact on our college and our university,” said Theresa Lee, dean of the College of Arts and Sciences. “This building, named in honor of their memory, celebrates their long history with UT and their passion for international experiences and biology and science education.”

The Mossmans truly embodied the Volunteer Spirit in giving back. Their generosity will impact UT students and faculty for generations.