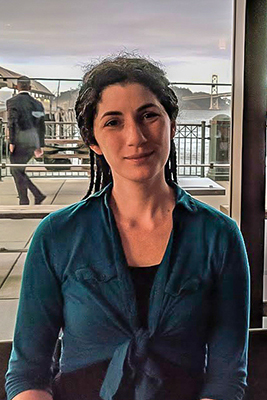 Nina Fefferman loves puzzles. Not the 5,000-piece jigsaw puzzles some of us attempted to piece together during lockdown, but the puzzle of trying to explain the world around her. As a professor in the Departments of Ecology and Evolutionary Biology and Mathematics, Fefferman’s research is varied, but it all comes down to the common core of trying to understand systems and how individuals make choices within those systems.

One of her favorite puzzle moments was an opportunity to use biologically inspired algorithms to design a cybersecurity detection protocol for Internet security. Fefferman used anomaly detection examples from the natural world, such as how bees forage for food or how ants forage for anomalies in their environment, and determined humans do something similar with risk construction.

“Instead of stating the specifics of why we are worried about a particular risk, humans tend to look at each other and say, ‘I’m worried about this – are you?’” Fefferman said. “Based on the answer, we change how vigilant we are about the risk.”

Using human behavior as a cue, Fefferman applied an abstract level of nonparametric statistics, which is based on categorical classifications instead of data-driven probability distributions, to computer systems for cyber security. It worked.

“With the toolkit of mathematics, logic, and modeling, you can start to tease apart the puzzle of what are explanations for things around you that seem so complicated that you could not understand how they happen,” Fefferman said. “I study mathematical biology because it lets me use my intuition as a person, but also the beautiful structures of logic and math to abstract the foundational features of a system that let me play with it – kind of like LEGOs, where you can build almost anything you can imagine. Ultimately, it comes down to what you can envision for one piece, so that’s a really fun puzzle.”

Recently, however, Fefferman has focused her theoretical expertise to one specific puzzle – the global coronavirus pandemic.

“Fortunately or unfortunately, COVID isn’t my first rodeo,” said Fefferman, who has worked in pandemic preparedness for 20 years. Her first experience providing real-time pandemic response for policymakers was the 2009 outbreak of the H1N1 flu. Since then, she has worked on the Ebola response in West Africa and the emergence of Zika virus as a global pathogen.

With the global coronavirus pandemic, Fefferman uses the logic of mathematics to understand the dynamics of a system in real-time, which informs policymakers’ decisions.

“What I’m interested in is how these systems build from local interactions and sometimes various, seemingly small decisions to very different qualitative outcomes like a huge outbreak or a well-controlled tiny outbreak,” Fefferman said. “Those kinds of decisions can rest on very small logical tweaks.”

Some modelers use data to predict future trends or outcomes. Not Fefferman. She looks at the factors to which the system as a whole is most sensitive and structures the logic to guarantee that the best chance in most cases is really good.

“In real time it’s hard to get the details right for a prediction model because of the complicated interactions or scaling involved,” Fefferman said. “My job is to ask how robust are the predictions to not getting it right and does that change the magnitude of the response? Sometimes we are willing to sacrifice an optimal outcome for one that is safer should we get the calculations just a little bit wrong. Making those tradeoffs in real time is really important.”

Since a good outcome is not a guarantee in many of these cases, Fefferman focuses on the most chances to get a good outcome, which makes her role as a theorist suddenly very practical.

“Even though I still talk in theories, what I’m doing is asking how does one theory build in ways that allows for the murkiness of reality,” Fefferman said.

As a result of her work, Fefferman is publishing several papers related to pandemic mitigation in a number of types of communities. One study was a collaboration between researchers with the ACLU at Washington State University, University of Pennsylvania, and Fefferman that predicted jails would act as vectors for the COVID-19 pandemic. Their modeling projected that deaths could double projections because jails were omitted from most public models. They also showed several factors that could increase the loss of life unless drastic reforms are adopted.

Another outcome of her contribution to pandemic preparedness in the last year was the opportunity to lead a National Science Foundation (NSF) workshop to figure out where gaps existed in interdisciplinary research about pandemic emergence. Is it possible to predict where the next pandemic will come from and how it will become a pandemic versus a one-off disease that emerges, but does not spread? The workshop brought together engineers, mathematicians, data analysts, biologists, virologists, anthropologists, and other academics who have been working in parallel on infectious diseases.

“We discussed how to actually integrate our work, which I will focus on in my own research,” Fefferman said. “How do we use the logic of mathematics to translate the integration across scales? Essentially, how do we use math as a Rosetta stone to get from field to field, figure out where the mismatches are, and then dig in on those mismatches?”

Collaboration and integration is a big theme for Fefferman moving forward, especially in her new role as director of the National Institute for Mathematical and Biological Synthesis at UT (NIMBioS). One of her immediate new goals is to support new research initiatives at the interface of mathematical biology for people who are not mathematical biologists.

“If you are a biologist who is ‘math curious,’ come to NIMBioS!” Fefferman said. “We want to reduce the barriers for researchers at UT who have a great idea, but maybe not the time to write a grant proposal. Or, perhaps they love a research idea, but it does not seem to have a high enough probability of success relative to the meat and potatoes of what they do. These are some of the types of researchers we want to provide infrastructure for connecting to other researchers at UT.”

Fefferman sees the future of NIMBioS honoring much of the tradition built during the last 12 years it has been a Center at UT, which is to serve the research community internationally and to serve mathematical biology. When Fefferman arrived on campus in 2016, it was NIMBioS that drew her to UT.

The community of researchers in departments ranging from math and biology to biochemistry, microbiology, agriculture, and engineering energizes Fefferman.

“Having the community around me as such a vibrant set of researchers really helps me stay creative and engaged and thinking about how should I be altering my perspective so I don’t get into a rut about how I’m thinking.”

Fefferman’s impressive level of service related to her expertise in modeling epidemiological events, multiple publications, and her work with NIMBioS, NSF, and the CDC, earned her the Outstanding Service Award from the College of Arts and Sciences in 2020. And she is just getting started. Fefferman turns next to the question of how to improve supply chains during an emergency without having to shift gears completely and shocking the system, which is just one of the nine active grants she manages.

“There is so much beautiful complexity in the natural world and sometimes all it takes is a colleague to help you see things from a different perspective and catch their enthusiasm,” Fefferman said. “UT has this amazing number and diversity of people whose work is adjacent to mine, but not mine, that it can help me be a better scientist and a better mathematician.”