Budget Director Ann Robinson-Craig was one of the small army of College of Arts and Sciences staff members who continued coming to campus while most employees worked from home during the pandemic.

One day, not thinking, she left her third-floor office in Ayres Hall to grab a bottle of water from the kitchen down the hall. When the door closed behind her, she realized she was locked out of her office with no keys or phone. And no one around to help her.

Robinson-Craig wandered the hallways until she found a math professor working downstairs who called campus police to unlock her door.

“I learned my lesson,” she said, adding that she began wearing her keys on a lanyard around her neck.

Like Robinson-Craig, others who continued working on campus during the pandemic said the experience was both good and bad, strange and comforting.

A 28-year employee of UT, Robinson-Craig said coming into the office was a practical move for her.

While her husband, Classics Professor Chris Craig, came to campus to teach, he held online office hours and attended committee meetings from home. Their daughter, Carolyn, a graduate student in music at Yale, stayed in Knoxville when her classes moved online and practiced several hours a day. During that time, Carolyn also took up the violin.

“There just wasn’t enough bandwidth for everyone to stay at home,” Robinson-Craig said. “And a beginning violin student is something only a parent could love.”

Robinson-Craig also found it easier to be in the office during the university budgeting process, which began in April.

“There were papers I needed to have. I would have had to take home boxes and boxes of papers,” she said.

While it was nice to “just be able to park anywhere,” being on campus without throngs of people was a bit eerie.

“There’s an energy that comes from having all the students and all the faculty, everybody on campus,” she said.

Robinson-Craig’s favorite moment of pandemic solitary: One day in August 2020, she went into a conference room with a huge screen and watched her daughter – who by then had returned to Yale — perform a live-streamed concert.

“I turned up the volume and it was like I was right there,” she said. 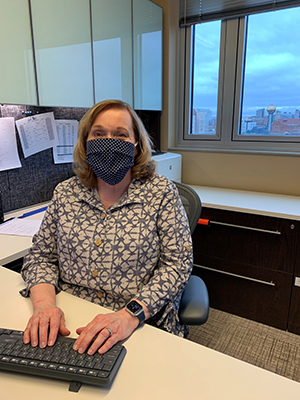 Melody Branch, the business manager for the Department of Earth and Planetary Sciences, has worked at UT for 43 years and planned to retire in December 2020. But when the pandemic hit, she postponed retirement for a year.

“We wanted to start traveling some and we knew there was nothing we could do,” she said.

After staying home for a few weeks when campus closed in March 2020, Branch elected to come back to her sixth-floor corner office in Strong Hall.

“I‘m old school. It’s easier for me to do my job here and if anyone needed anything, I was here,” she said.

In time, other employees began coming in on an alternating days.

“I felt the university really kept us safe. I felt just as comfortable here as I did at home,” she said.

Social distancing was easy since everyone had their own office. They masked if they were together. And wiping down the office became a daily habit.

“My perfume is Lysol,” Branch joked. 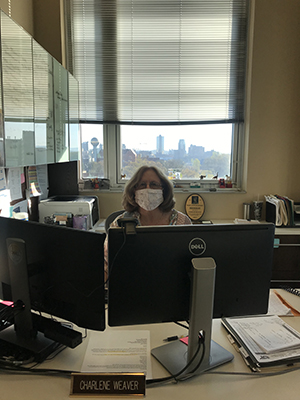 Charlene Weaver, business manager for the Department of Anthropology, works on the fifth floor of Strong Hall.

“I have a wonderful view from my office. Before March 2020, my view was bustling with people. After March 2020, zero activity most days,” she said. “Life on campus—especially until August 2020—could be quiet and a little lonely at times.”

Except for six years she took off to raise her family, Weaver has worked in the department since 1978. She became business manager on Jan. 1, 2020.

Coming into the office to work was “more calming and more productive than working from home,” she said. “I enjoy the separation of work and home life.”

Nancy Loftis, an administrative specialist III in the Department of Sociology, continued going to her office on the ninth floor of McClung Tower two days a week when the pandemic hit. She worked at UT for 34 years and just retired in January 2021.

“I couldn’t get myself in a position where I was accomplishing what I wanted to get done at home,” she said.

Like others who ventured onto campus, Loftis would get up every morning and take her temperature, then complete a short online questionnaire to clear herself to go in.

She’d park in the relatively deserted McClung parking garage and use her key to unlock the elevator and go upstairs.

“There were other people in the building, but not on my floor,” she said

She’d wipe down her office first thing in the morning and again before going home.

In the beginning, delivery services were suspended so Loftis went to Mail Services each day to retrieve the office’s mail. She’d also make trips to Facilities Services to pick up masks, hand sanitizers, gloves, and other supplies.

For a while, she and other McClung Tower employees took turns staffing a central office where visitors could stop for assistance. Aside from doing her normal clerical tasks, she spent considerable time helping to move classes online, making sure instructors had internet hot spots if they needed them, and ensuring those working on campus had plenty of masks and cleaning supplies.

Molly Green has been an administrative specialist II in the Department of Geography for two years. Her office is on the third floor of Burchfiel Geography Building.

“There isn’t space in my small apartment for me to properly have an office set up, and we are fortunate that Burchfiel houses only the geography department. There was no danger in coming to my office during the pandemic, and I was able to maintain a sense of normalcy,” she said.

She was glad that a handful of colleagues, including Business Manager Pam Sharpe, also came into the office to work. While they stayed far enough apart for safety, they were close enough to feel camaraderie.

“Being able to come to work and see my colleagues helped keep my morale boosted,” she said. “It was nice because we got to foster a sense of community and support for one another during a really weird time.”